Transition of ownership to the third generation is the central point of discussion among Hinduja family members in recent years, say industry sources. “The boys are in big roles now, either in GOCL Corp or Ashok Leyland. Only Srichand Hinduja’s daughters are pursuing career in the group business. The litigation is for the control of the bank in Switzerland since no formal division has happened in the family,” says an industrialist on condition of anonymity. 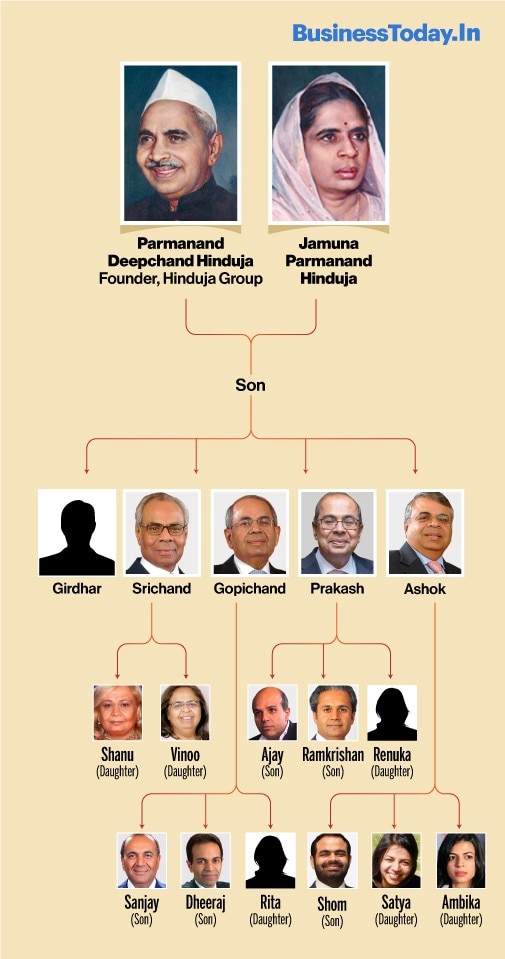 From outside, the Hinduja Group seems to be largely controlled by the second generation — Hinduja brothers Srichand (84), Gopichand (80), Prakash (75) and Ashok (70). But the fact is that the operations of most of these businesses — Ashok Leyland, GOCL Corporation (formerly Gulf Oil), Hinduja Bank (Switzerland) among others — are headed by the third generation, except in the case of IndusInd Bank, where professionals are in charge.

The issue in the Hinduja family cropped up in the public when Srichand’s daughter Vinoo moved High Court in England, acting on behalf of her father as a “litigation friend” and asked for “partition”. She wants her family to get the control of Switzerland-based Hinduja Bank, in which her father is the chairman emeritus and elder sister Shanu is the chairperson. Shanu’s son Karam Hinduja joined the bank as CEO about a week ago.

The bone of contention among Hinduja brothers is a letter signed by them in July 2014. The letter says that the “assets held in any single brother’s name belong to all four”. Hinduja Bank is a small-sized bank with total assets of 343 million Swiss francs (Rs 2,744 crore) as of 2018. It also owns close to 5 per cent in Ashok Leyland.

ALSO READ: Hinduja brothers’ rift out in the open: All you need to know

“If the family wants to retain $11.2 billion fortune as the joint property, they should introduce a family constitution to avoid this kind of disputes. Like in the Bajaj group, the separation of management control and cross ownership of promoter families can be possible only through family settlement agreement,” said an executive.

Gopichand has two sons, Sanjay and Dheeraj and a daughter, Rita. Sanjay is the chairman emeritus of GOCL Corporation and Dheeraj is the chairman of Ashok Leyland. Prakash Hinduja has two sons, Ajay and Ramkrishan, and a daughter, Renuka. Ajay is the chairman of GOCL Corp and Ramkrishan vice chairman. Ashok Hinduja has two daughters, Ambika and Satya, and one son, Shom. Shom joined Hinduja group in 2014 after working with KPMG as advisory associate. He is now the president of Alternative Energy and Sustainable Initiatives at Hinduja Group.

Ambika Hinduja is a Bollywood film producer. Satya is a DJ and a well known music producer.

According to the Hinduja group website, each brother has been given separate business responsibilities. Besides Hinduja Bank, Srichand also holds the chairmanship of the entire group and the CSR arm Hinduja Foundations. He conceived the idea of IndusInd Bank and executed it with the contributions from the NRI community.

Gopichand is the co-chairman of Hinduja group, but he is in charge of the operations of Hinduja Automotive Limited, UK as the chairman. The first two brothers are based out of London. Gopichand led the transformation of the group from an Indo-Middle East trading operation into a multi-billion dollar transnational conglomerate. Besides, he spearheaded the acquisitions of Gulf Oil and Ashok Leyland in the 1980s.

Prakash, the third brother, heads Hinduja Group (Europe) as the chairman. He joined the family business in Tehran, Iran and later moved to Geneva in Switzerland and took charge of the Group’s European operations. Thereafter in 2008, he moved to Monaco.

The youngest brother Ashok Hinduja is the chairman of Hinduja Group of Companies (India). He is based out of Mumbai. From the operational point of view, he has a bigger role among the brothers. Ashok Hinduja joined the family’s expanding business at a young age by looking after the affairs in India, the website says.

The three Hinduja brothers, who are defending the case, said in a statement that Srichand’s health has been deteriorating for a number of years. He is suffering from Lewy Body disease, which is a form of dementia. “It is very unfortunate that these proceedings are taking place as they go against our founder’s and family’s values and principles,” they said. They also added that these are private family matters which are now the subject of litigation and they cannot comment any further.