In India, economic growth cycle coincides with the investment cycle. A component-wise analysis of GDP suggests that the growth rate of real investment decelerated sharply after 2011-12

A recent working paper by the RBI shed light on the relationship between firms’ leverage and their investment behaviour in India. The experimental results suggested that firm-level leverage could provide early signals about the movements in investment cycle. Further, the paper finds that firm’s leverage adversely affects its investment activity in a non-linear manner; at lower levels it has a positive impact on its investment while at higher level it affects investment negatively.

In India, economic growth cycle coincides with the investment cycle. A component-wise analysis of GDP suggests that the growth rate of real investment decelerated sharply after 2011-12. “In terms of contribution to GDP growth, the share of capital formation during the period 2011-19 was less than one-fourth in contrast to around two-third during high growth phases of 2003-08 and 2009-11. Within gross capital formation (GCF), contribution of gross fixed capital formation (GFCF) during the period 2014-19, at around 25 per cent, in fact, was significantly lower than the level of 51.3 per cent seen during 2003-08,” the study added.

During the high growth phase, the firms in key infrastructure sectors witnessed an increase in leverage and consequent deterioration in their debt repayment capacity after 2011-12. The build-up of leverage in power and telecommunication is a relatively recent phenomenon, while in iron and steel and construction sector it is a cyclical phenomenon. These sectors grew at a rapid pace during the high growth phase, while also building up firm level leverage. The build-up of leverage is reflected in the deterioration of interest coverage ratio (ICR) of these sectors. Among these, worsening of ICR of the telecommunication sector was very prominent. Further, the mean rate of capital formation or the ratio of annual change in gross fixed assets to gross fixed assets at the end of the previous year by non-financial firms peaked in 2008-09. Since then it has recorded a secular decline across sectors. The average rate of capital formation, however, reversed its trend in 2017- 18. Debt-equity ratio, a key proxy for firms’ leverage, increased considerably after 2008, though it showed some signs of easing in 2017. Average debt to equity ratio during the period 2011-17 was 1.5 as against 1.3 during the period 2004-11, the study showed. In line with the rise in debt-equity ratio, firms witnessed a general deterioration in their debt repayment ability as measured by interest coverage ratio. 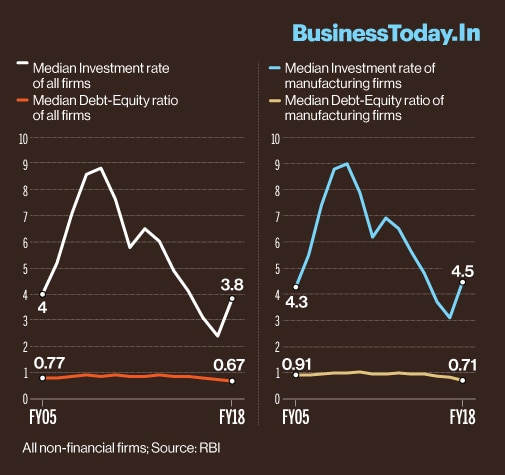 The study concluded that initiatives to clean up balance sheets of banks and deleveraging by non-financial corporates should help in revival of the investment cycle.