The markets may have ended on a flat note on the last trading day of June, the first six months of 2020 mark a consequential trend to take note of.

The stock market, it seems, is heading towards the much-needed stability by reducing its dependence on foreign money. The domestic institutional investors (DIIs) pumped in Rs 88,132 crore in H12020, the highest ever investment in the first half of any calendar year since 2008. In contrast, FPIs, or the foreign portfolio investors pulled over Rs 18,000 crore during the same period, the second worst-sell off since 2008. They withdrew the maximum, Rs 25,465 crore, in the first six months of 2008 when the world was feeling the tremors of the global financial crisis.

Although a divergent trend between FIIs and DIIs has been a phenomenon since long, this could be attributed to the investment opportunities available at the fund manager’s disposal. “Normally during any global crises, foreign investors are the first to sell and they treat a country like a business which they are holding. They may have holdings in a number of developed and emerging market equities, where they just press the sell button and try to exit in a hurry. While domestic institutional investors scout for investment opportunities within India, a lot of FIIs have global mandates and hence continue to compare India with other markets to evaluate which stands better on risk reward metrics,” explains Devang Mehta, Head – Equity Advisory, Centrum wealth management.  This also shows that Indian managers are seeing this market correction as an investment opportunity which should ideally be the case, he adds. 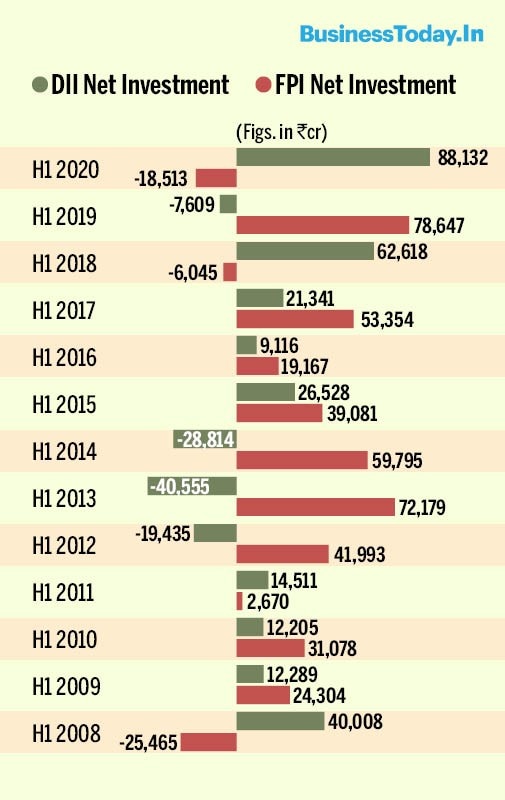 Markets have recovered significantly (over 35 per cent) from their panic lows made in March 2020 and FPIs turned net buyers with investments of over Rs 36,000 crore in these two months after being net sellers in March and April 2020. Meanwhile, domestic investors sold equities (worth Rs 825 crore) only in April during the first six months of the year.  According to Mehta, “With abundant liquidity pumped in by Global Central Banks & positive commentaries on fiscal stimulus across important nations, sentiment towards equities has revived, but macros and micros are still not supportive. For our markets specifically, we have been following the strength in the global markets and have been beneficiaries of foreign flows off late.”

In absence of earnings growth, markets are expected to correct or remain volatile, if liquidity dries. However, a sharp upside may happen if some clarity emerges on vaccine or drug. “With inflation and interest rates heading south, initial reports of good monsoon, robust rural demand and not many avenues to invest, domestic flows could sustain. As and when the situation improves, India will surely be a beneficiary of fair amount of global allocations and hence foreign flows,” points out Mehta.